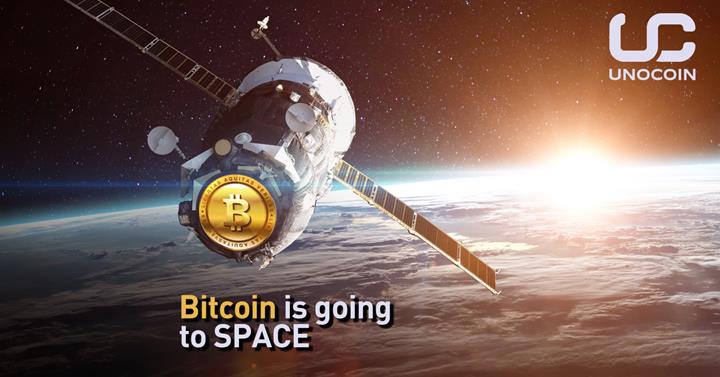 Bitcoin is a complicated technology that can boggle terrestrial minds, and about the only thing that could make it even crazier is if the digital currency went to space.

Welp, it just did.

On Tuesday, bitcoin software company Blockstream announced the launch of a satellite network that beams bitcoin to people without an internet connection all over the world, for free. This would allow people in, say, South Africa, where there are very few people using their computers to support the bitcoin network, to do so without paying data costs or even having an internet connection in the first place. Other companies have looked to space as a storage option for bitcoin, but Blockstream is the first to actually beam the blockchain down from space.

Bitcoin is decentralized, so computers all over the world running "full nodes" work to confirm transactions and keep the network safe. Nodes can also contribute to community decisions about code changes to bitcoin. But running a full node requires a full version of the bitcoin blockchain (which contains a record of every bitcoin transaction since 2009) to be continually downloaded to your machine. If you live somewhere where the internet is extremely expensive, like the Canadian Arctic, this can make the idea of contributing to bitcoin a non-starter.

"The cost of running a bitcoin node is probably about $100 or less a month, for the internet connection, in the West," said Blockstream CEO Adam Back over the phone. "But in other parts of the world, that might go to living expenses for their family or something like that."

Blockstream's satellite network beams the blockchain directly to your computer for free, but the hardware to make use of the system may still cost a bit. According to the project's GitHub documentation, you'll need a computer (duh), a TV satellite dish, a receiver, and a Software-Defined Radio (SDR) USB stick that allows your computer to receive radio frequencies. "We wanted people to be able to repurpose their TV satellite dishes or find an old one somewhere, because they're everywhere," said Chris Cook, head of the satellite project, over the phone. "After that, all you need is a little USB dongle that costs $20 and a [receiver], which is about a $12 item."

Once you get all that hooked up, you'll be able to sync up with one of several satellites that Blockstream is leasing bandwidth from, and start receiving the bitcoin blockchain. According to Blockstream, the satellite network currently covers much of the US, Latin America, Africa, and parts of Europe. Within the year, according to Back, the company plans to extend its coverage area to most of the world.

"I guess there might be some research scientists in Antarctica who won't be able to use bitcoin," Back said, joking.

There are a couple caveats to mention here. A big one is that people still need an internet connection to actually send or receive bitcoin or interact with the network, and Blockstream's one-way satellites don't solve that problem. Another is that running a full bitcoin node is basically a charity, and even with a reduced barrier to entry you still really, really, really have to want to do it because you're not going to get anything out of it, financially.

Even though Blockstream is going to be beaming the blockchain down from space for free, the company eventually wants to make some money. According to Back, it's betting that bitcoin mining companies will be willing to pay a premium to have a backup link to the bitcoin network that doesn't rely on the internet. Blockstream will also open the system to developers, who may want to code bitcoin apps that beam data down to people's phones.

Until then, let's all just reflect for a moment on the fact that bitcoin is in frigging space.