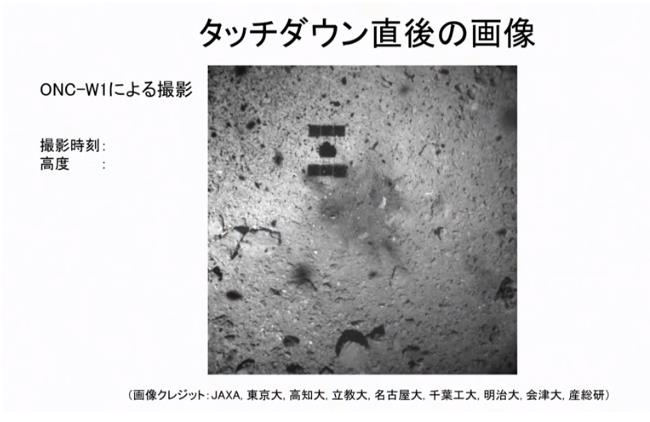 The Japanese Spacecraft Hayabusa-2 made a successfull touchdown today (February 22, 2019) on asteroid Ryugu today. According to spacecraft telemetry, a sample was taken from the asteroid to bring back to planet Earth in 2020.

Asteroid 162173 Ryugu, provisional designation 1999 JU3, is a near-Earth object and a potentially hazardous asteroid of the Apollo group. It measures approximately 1 kilometer (0.6 mi) in diameter and is a dark object of the rare spectral type Cg, with qualities of both a C-type asteroid and a G-type asteroid [wikipedia].

The Hayabusa-2 asteroid probe is the sequel to the Hayabusa probe, designed for returning asteroid samples. By investigating a different type of asteroid (type C) from the Itokawa asteroid (type S) that was the target of Hayabusa, Hayabusa 2 will explore not only the origins of the planets but also the origin of the water of Earth’s oceans and the source of life.

Hayabusa 2 will more or less follow the sample return method carried out by the first Hayabusa. However, many improvements have been made to increase reliability so that missions can be completed with greater accuracy. On the other hand, the probe will be put towards new missions using new technology such as technology for creating artificial craters on the surface of the asteroid and carrying back samples of the underground soil. Improving probe technology for astronomical objects in the solar system is an important goal of Hayabusa 2.

Hayabusa 2 aims to examine the Ryugu asteroid (162173). Ryugu is a type C asteroid, but it is believed that there were organic matter and water on the asteroid when the solar system was created (roughly 4.6 billion years ago) and that these still exist. The second goal of Hayabusa 2 is to solve questions such as where the Earth’s water came from and where the organic matter which makes up life was created. Still another goal of Hayabusa 2 is to examine how the planets were created through the collision, destruction, and combination of the planetesimals which are thought to have been created first. In short, Hayabusa 2 is a mission designed to elucidate the secrets of the creation of life and the birth of the solar system. [JAXA]

I hope we can keep up with all this excellent progress from the last decade.  It feels like things are accelerating!

Lots of exciting space stuff coming up! I am keeping an eye on all the plans coming up: http://www.eyeonorbit.com/2016/10/space-missions-manifest.html?m=1