Poland can into games! Interview with Beekeeper developers

Today we are talking with Kacper and Jakub, who create the two-person studio Absolute Horizon. Currently they are working on Beekeeper. We will find out what the production of independent games looks like and what hopes the creators have for this indie-game market.

Who are you and how did you meet?

Currently we are IT students at the University of Bialystok.

We met just before the beginning of the academic year, which seems to have had a significant impact on the development of our relations. It is a great feeling to meet someone who understands you in almost every aspect and motivates you to work. Each of us is looking for a soul mate in someone. This was the case in our case, too. We get along very well to this day, and the final effect of our work will perhaps only confirm that.

How was your studio created?

Right at the beginning of our studies we discovered that we got along very well and decided to try to create our first joint project together. The fact that today we have the pleasure of giving this interview means that the project is still up to date and in production, and it is slowly coming to an end.

Is Beekeeper your first game?

In the current two-two squad, yes. Kacper has already completed one previous project. We are happy that we can work together. That's twice as much creativity, twice as much discipline, time and organization. They say two heads are better than one. :) What's the game all about and what's the idea behind it?

The main topic of the Beekeeper is the management of the apiary in the broad sense of the term and the sale of honey. Thanks to the money we earn, we are able to invest in new land for building beehives, as well as to offer honey of higher and higher quality.

At first, we sell honey through a publisher, but once we gain experience, we will be able to create our own jars with badges, choose the shops where our honey will be delivered and the suppliers who will deliver it. Thanks to the information that we will be able to read from the local newspaper, we will know exactly what kind of shops or shapes of jars are currently on the rise, what will transfer into our earnings. In addition, the newspaper periodically publishes a ranking of the best apiaries, and our goal is of course the first position in this ranking. "Beekeeper" is the first such economic strategy on beekeeping, enriched with pixel-art graphics. The game was even included and published in "Pixel" magazine as a title announced for 2019. :)

One evening Jakub came up with an idea, stating that there has never been such a game before and in fact few artists focus on "bee" themes. The first concepts of the game captured us and we decided to take care of this project and lead it to, we hope, a global distribution.

How long does it take to design a game?

Works on the game have been in progress since mid-October 2018. We are able to solve all the difficulties together. The graphics used in the game is made by us ourselves. We would like to work out every little "detail" to the best of our ability to satisfy future potential players. Working in two people on such a complex project needs to spend a lot of time on organization and writing step by step what should be added or supplemented to make the game not only attractive and pleasing to the eye, which could teach logically think and develop imagination.

Are you going to release the game for sale, if so, on which platform?

"Beekeeper will be released on the Steam platform later this year.

You can play our game on Windows, Mac OS and Linux.

Perhaps in the future we will undertake to release our product on the Xbox console.

Is it easy to publish a game?

This requires a bit of discipline and organisation, but subjectively speaking, it is not as difficult as it might seem. The current game development software is very intuitive and logical. Someone who knows what he's doing will certainly make noticeable progress and will probably be successful. However, the knowledge gained during the studies (in our case - IT) seems to be definitely helpful.

What is pixel art for you?

We could say that it is a form of expression, self-expression and a sentimental return to previous productions. In fact, we really like this graphic style, and one of its advantages is the small size of the graphics themselves, which has an impact on the optimization of the design.

What programs do you work on?

We work on Construct 3 engine, for graphics using GIMP and for animation Spriter PRO. We enjoy working on them and recommend them to anyone who begins their adventure with gamedev. 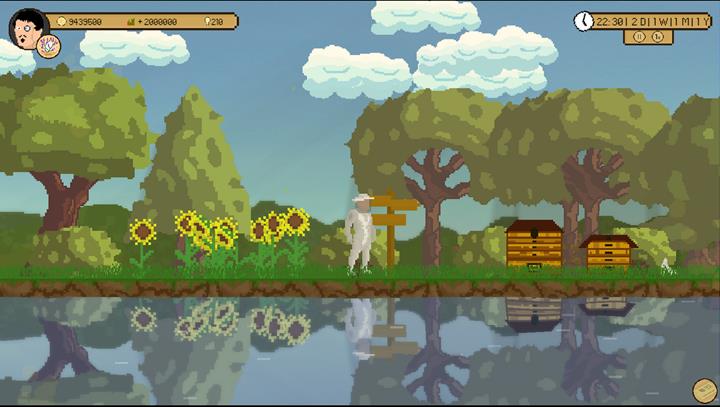 Do I need to be a programmer to create my own game?

Contrary to appearances, no. It is worth knowing the programming language, because its knowledge sometimes allows us to solve problems in a more optimal way. The most important thing is to learn to think logically and not to be afraid of the challenges that await us. When something gives you a problem, don't bury your head in the sand, just try to get used to it, understand, because maybe one day it will turn out to be the key to success.

The planned premiere should take place later this year.

What's next? What are the future plans?

After the premiere we will certainly not be able to start a new project right away. First of all, we will want to correct any possible imperfections of "Beekeeper" and introduce new content to the game. We assume that the game, which is constantly updated, is also more attractive for the potential player. And then what happens next? Definitely another project. We will make every effort to ensure that each new project is at a higher level than the previous one.

We wish you good luck and in some time we will return to the conversation :)

Thank you and we look forward to it! :)