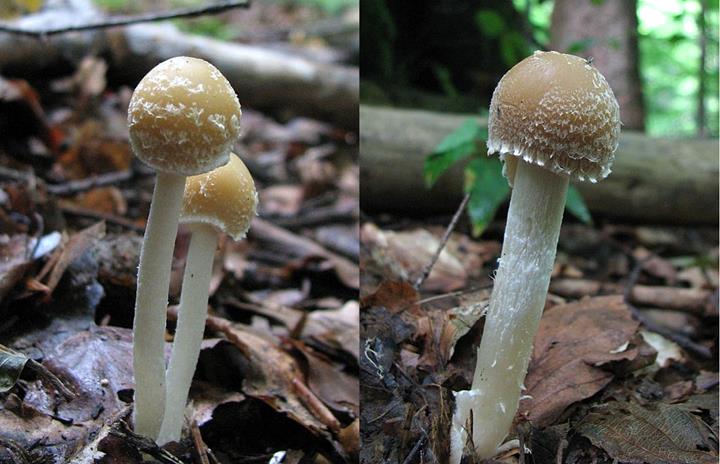 Psathyrella candolleana - A hat with a diameter of 40 to 70 mm, initially bell-arched, then flat, with a thin, ragged margin, very brittle, absorbent; surface dry, dull, smooth, with little visible radial furrows, often frosted in young specimens; whitish, ochraceous, brownish, on the top of yellow-brown, on the shore with a purple coating and hanging residues of the white casing.

Gills thick, cut and adnate to the stipe; whitish, later charcoal, in old specimens brown-purple; on the white blade.

The ring sometimes remains in the shape of a ring.

The flesh in the hat is very thin, fragile; whitish, unchanging; with a mild taste and no smell or a weak, mushroomy flavor.

Occurrence: On the ground, on stumps, between the remains of rotting wood; in deciduous forests, parks, gardens, on the edges of roads; grows in large numbers, in groups and colonies; very common. From May to October.