Bit of a frustrating day, initially.  We simply could not find out what time the buses started in the morning so we were up at 5 am and at the bus stop before 6. Our plane was to leave at 8:30 so we thought we had lots of time.  Waiting, waiting, waiting...  by 6:45 we had not seen a single bus going in any direction so, in a moment of mild panic, we flagged down a passing taxi for the 1/2 hour  trip to the airport.

I need to mention our favourite bakery - it was open and busy by the time we got there (bus stop right outside). It is amazingly busy - even at 6 the street was packing in front of it, double- triple-parked.

Flight to Athens was 30 minutes, metro downtown was an hour and we used our lovely Google Maps to find our hotel.  Interesting neighbourhood, graffiti everywhere on every surface, odd women standing on the corners in skimpy clothing.  And it went downhill when we met the manager of the hotel - just creepy.  The good news, though, was that in spite of our reservation there was no room at the inn and we had to move on.  Thank you!!!  We easily found a nicer place, dropped our suitcases off and took off exploring. Important to note though, that this is the first time that we have (nearly) stayed in a hotel that made us so uncomfortable.

We are only in Athens for one day, so we are saving the Parthenon et al for the last few days of our trip.  Today was just for orientation.  We followed Rick Steves Athens City Walk for the most part which, thankfully, was in a different part of town than our original hotel.

Walking around gave us a better impression of Athens and by 1 pm we were really enjoying ourselves.  Like Rome, we kept running into ruins in the middle of parks, under parking garages, etc.  Lots of tourist stores. Lots of restaurants.

This is picture of the Temple of Olympian Zeus with the Acropolis in the background. 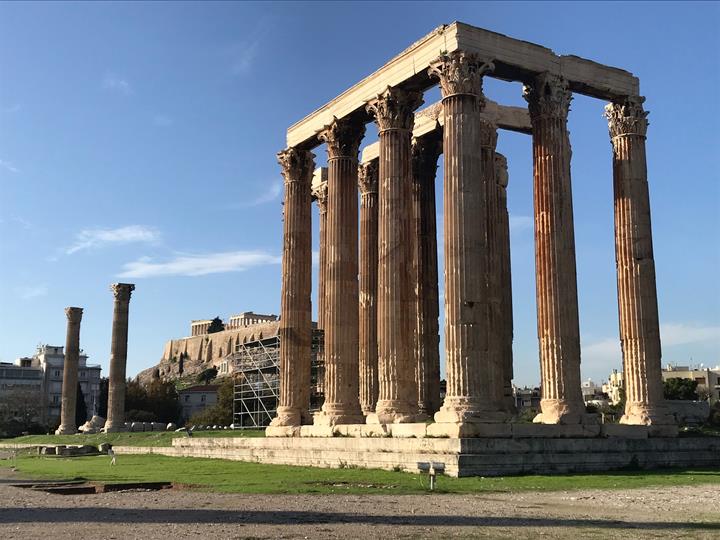 Tonight we are taking it easy, partially because of the early morning and also not wanting to walk around this neighbourhood in the dark.  Tomorrow, bus to Nafplio.