The whole crypto market suffer a drop more altcoins did more than other, reasons? To many at least.

Bakkt did prove institutional investors are not interested meaning Bitcoin influencers got you.

The hashrate flash crash, some say electricity outrage, some other say difficulty is too hard profits to little and finally some governments are cutting the plug in mining operations. I would say all of them are the reason. I would say that if price keeps on dropping so will hashrate.

What is to come?

Altcoins in total are bearish because they together have broken mayor supports so altcoins will continue to drop and since Bitcoin only utility is to buy or sell altcoins so Bitcoin will come down together with the altcoins.

Once tether gets owned by the attorney general than right after that another drop for the whole crypto market.

Whales and exchanges were using tether and stable coins to manipulate the price and to also avoid paying taxes, once the creators of that coin get caught by the government they will have to buy or sell in register exchanges that do pass your data to the government and so the price will drop.

The truth is Bitcoin is in turn boiling water, government and its institutions are actively attacking all cryptos, they will not outright ban it they will just kill it by thousands cuts and the current scaling issue won't help it either.

Example let say a recession hits and people want to use Bitcoin as a currency well you are fuck because than your tx will get to $50 for tx really quick, so in a crisis current Bitcoin won't help you, you won't be able to exchange btc for good and services in a crisis like situation. Don't believe me in Venezuela they are using fucking dash. So if Bitcoin won't help you in times of crisis that means the store of value bs it is just lies for you to be the last sucker holding while whales and influencers get out.

The fact that government want to tax your holdings in cryptos should be enough reason for price to fall to $200 again, and current bitcoin blockstream versión is 100% making sure government can track you and tax you, current version of Bitcoin Blockstream version will sell your ass if the government ask right away.

If you can't use Bitcoin as currency that means that you are forced to use as store of value meaning the only tx you will be willing to paid will be between your personal wallet and your exchange, making the government jobs easy, if you use it as currency than more people will use the system making harder for government to track your movement. That is why limiting the block size and store of value go together the less you use the coin the easier it is for any institution bent on tracking you easier.

Also if the tx fees are too high only rich users will be able to use shuffle services to hide their tx.

Lighting won't help you either because the LN nodes can be censored because nodes can choose to who and who can connect to you. The truth is exchanges can start creating their own nodes and only accept nodes that are kyc with them. In the on-chain nodes the only way for nodes to stop listening to your node is if your node is not in consensus meaning I want to mine 2mb blocks when the whole network says 1mb.

With LN nodes you just need to change some parameters and there you have it censorship because you are not kyc.

AND DON'T TELL ME IT US NOT TRUE BECAUSE YOU WELL KNOW THAT WITH LN NODES IT US POSSIBLE TO DO JUST AND IF IT IS POSSIBLE SOMEONE WILL SURE DO IT, SPECIALLY IF THE GOVERNMENT SAYS SO.

You can bet your ass that services like, Cobo Wallet, wallet of Satoshi, coinbase and any exchange or company if the government says you will only connect and accept connection from only kyc nodes you can bet your ass companies will comply right away taking with that Bitcoin lighting network futures.

With on chain scaling they will have to say to each individual that running software on their own devices is forbidden risking a people's revolution or at least making visible how currupt the govt actually is.

LN between regular users won't work at least not yet because people are not willing to exchange Bitcoin in a peer to peer basics. And blockstream supporters are actually busy telling people that they shouldn't spend their btc making people hesitate so even if ln get ready by the time a crisis hits all of those years of indoctrination by blockstream will paid of and people will not create channels between themselves but only to wallets and exchanges.

As a matter fact if I create a channel the only utility for such channel will be with an exchange or an exchange wallet because one I would not like to spend my btc and the other because their is no real people accepting it. That will help to ln centralization because people just will open channels to centralized services.

At least with on-chain scale you get you use it to a peer to peer even if it an exchange and the network rules are the consensus in ln you can choose to who to connect and you can block nodes as well.

It's so easy to refute your points.  Where are you getting your information?

Who cares about institutional investors? That is not the reason for the drop - this is actually a very minor price change at this point.  If it keeps going below $3K, then maybe there is something of note.  Just look at the price graph over the last year. 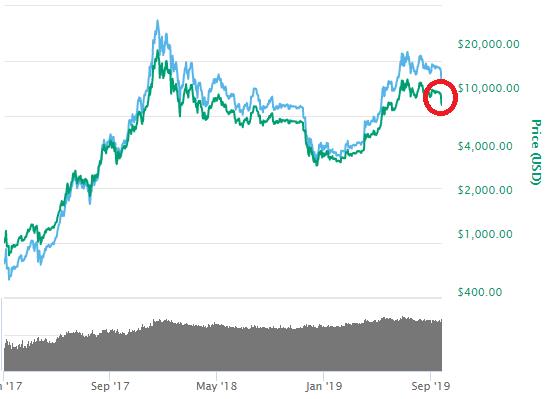 About the hashrate - that's just noise.  Again a graph to illustrate my point.  That little blue line is BCH (which lacks security as you can see). 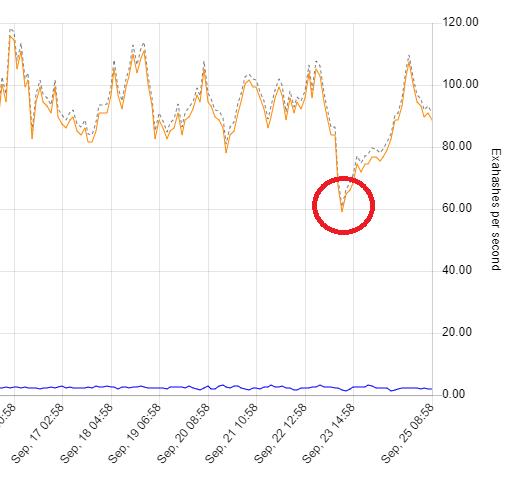 > government and its institutions are actively attacking ﻿all cryptos.

No.  No they're not. Apply Hanlon's Razor: "Never attribute to malice that which is adequately explained by stupidity" (or ignorance in this case).  They just don't understand it yet - claiming use in terrorism/etc. That's false.  They do think it's used for tax evasion - but then, so is cash so ban cash?  (actually I shouldn't joke about that - it's happening).

No. Governments want to tax capital gains and income, not holdings in cryptos.  Besides - progressive governments have actually been eliminating taxes on crypto: https://cryptoresearch.report/crypto-research/taxation-cryptocurrencies-europe/ note Germany.  They just don't know what to do yet.

> because the LN nodes can be censored because nodes can choose to who and who can connect to you [...] AND DON'T TELL ME IT US NOT TRUE BECAUSE YOU WELL KNOW THAT WITH LN NODES IT US POSSIBLE TO DO

It's not true. Get this into your head: LN nodes cannot censor transactions.  In the same way you can block IP by nodes or miners, it doesn't stop the network.  But even better than regular blockchain - LN can't see payment source or destination (unless you are the source or destination).  It just can't be censored like that.  It's a technical impossibility what you propose.  There are private channels, channels over tor, etc.  It's actually in many ways more censorship resistant than regular blockchains.  (e.g. no way to do a 51% attack targeting a channel).

there is NO SUCH THING AS A KYC NODE.  anyone can run a node - are you going to KYC yourself?  Think about it.

> LN between regular users won't work at least not yet because people are not willing to exchange Bitcoin in a peer to peer basics. [...] if I create a channel the only utility for such channel will be with an exchange or an exchange wallet because one I would not like to spend my btc﻿ and the other because their is no real people accepting it.

WTF are you trying to say?  It's ONLY exchanged in a peer to peer basis.  Ridiculous.  I can open a channel with anyone I want, and I leave that channel open. Anyone can open a channel with me.  This is utter nonsense.  I only spend BTC via LN these days.  I give BTC to users on ZapRead and other websites.  I buy things on bitrefill and coincards.ca.  I don't need any exchange or anything special to do that - I use Bitcoin Lightning Wallet on Android - non custodial.

> with on-chain scale you get you use it to a peer to peer.

You need to look up the definition of peer to peer.  Only the nodes in blockchain are "peer to peer".  You need tx validation by miners (a third party), which by definition means transactions are not a peer to peer.  That's not a bad thing - but it's a semantic point.  LN is actually a true peer to peer network, since no third party is required to settle channel updates. https://en.wikipedia.org/wiki/Peer-to-peer