Click this button to donate 100 satoshi for my security research.

Until a while ago, this button was working.
You'd tip me 100 satoshi, directly from my post, without XSS.

This is one of the more interesting bugs I found and reported to ZapRead, because it involves money!
Many bugs have been fixed by Zelgada, props.
Some are still open, some of them are public.

I decided to share this one, because it's a funny combination of:
1. A CSRF to Tip Money
2. Very lax XSS sanitizer rules
3. A JSON endpoint accepting x-www-form-urlencoded

To be clear, you could have exploited this csrf alone.
But I thought it was cool to do it inside the zapread UI.

I could have used an iframe, yes, but I guess then Zelgada wouldn't be so cool about this.

Public Disclosure?!
I think I gave Zelgada enough time and just wanted to drop a cool bug !
Read more below.

Have fun reverse engineering this while it's vulnerable! Edit: It was fixed in 29 min.

Results: 1 "hacked" donation + bounty from Zelgada. Thanks for not calling your lawyer Zelgada ;)

You created a form which calls the tip endpoint.

I made this an anonymous method and anyone has to click the button to call it.  I have been tightening up the XSS parts as well.

The tip feature is  mostly working as I intended so that users don't need an account to send tips - they can send tips from their LN wallets (or account balance).  I was debating removing the tip function all together, and you're starting to make a good case for that.

I suppose the forms can be used to create a social engineering attack so I'm going to disable that.  Other than that, I added an anti-forgery token to the tip endpoint so that this can't be called from other sites.

TL;DR: Props for the fast fix! Only 29min until this was fixed!
That was fast, you tought me a lesson: public disclosure fixes bugs!

I suppose the forms can be used to create a social engineering attack so I'm going to disable that.  Other than that, I added an anti-forgery token to the tip endpoint so that this can't be called from other sites.

This certainly fixes this case! But you can add another layer of security here.
Just to be clear, this could also have happened automatically in an iframe of a post.

> this can't be called from other sites.

To achieve that goal you can verify the Origin Header. Once you disabled forms you can simply use this header as another protection.
On this endpoint it is always set (Origin: https://www.zapread.com). because you only call it via JS i guess.

Other than that, props for the fast fix :D

Even tho' I joked about the lesson you tought me, this is actually a very good example why people m﻿ay like public disclosure.

I was in this conflict if I should disclose this or not.

I really like zapread, but after all, I was right.
29minutes of a bug being public vs months of being unfixed was worth it... in this case.
If you, dear reader, find a bug, you should always submit it to Zelgada first.

I think I'll only sometimes publicly disclose bugs (if legal) after 90 days or whatever.

Well, the source code is open source and I am just one person doing this in my spare time.  Even better is to submit a patch yourself 😄.

As for cors I am pretty sure the endpoint doesn't accept on back end from another site even if that isn't advertised.  I haven't verified however.

> Even better is to submit a patch yourself 😄.

YES, ofc. It just doesn't feel natural...
Another big problem in security: there are bug bounties, but not many fix bounties.

> I haven't verified however.

Me neither tbh, but it doesn't scream when you play with the Origin header.
I'm sure this CSRF could have been exploited the usual way.
Whatever, another bug fixed, good day.

I would like to support such a project, but I think there are not many developers so far. But why not? ;)
124

Maybe it would incentivise developers to help out!

Have you seen such an image before? It explains an XSS polyglot.
That is a payload that works in more than 1 context: inside comments, inside of a tag, directly in javascript source etc.

The creation of these payloads is a hard, time-consuming problem that some associate with witchcraft as it is very hard to reason about how a certain payload is working.

Cross-Site Scripting can be taken to crazy levels!

"With an Cross-Site Scripting (XSS) in the user interface attackers can execute arbitrary code in the context of the main browser application process.
This allows for cross-platform exploits of high reliability."

"Listen, well, young folks. Old people, browser hackers or Mozilla fanboys, might use this as an opportunity to lean back and stroke their mighty neckbeard, as they have heard all of this before" ...

Here read about another UI XSS.
This one was found in Counter-Strike: Global Offensive.

A collection of XSS tricks, I'm sure you'll find something new in there. 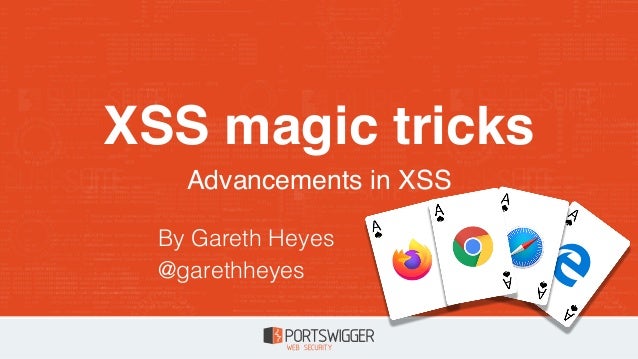