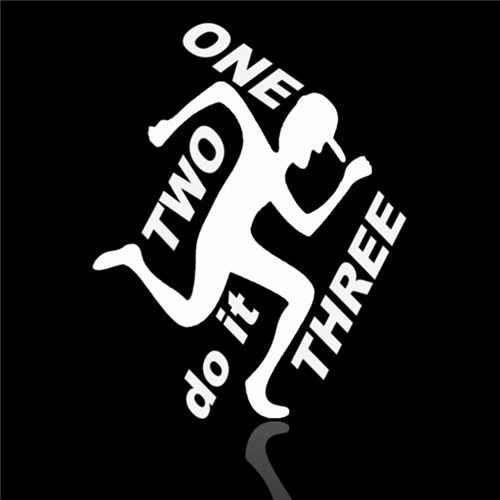 Do you know what censorship is?

In Poland, on 31 Jan during the weather forecast, a weather presenter on public television put a sticker promoting a charity which buys equipment for children's treatment.

Unfortunately, this charity is not supported by the government (Because the creator supported women's protest, supporting the abortion of seriously ill babies).

The presenter was fired and the material was removed from the website.

I have been working for some time on various solutions to improve your bitcoin lives. The plans have gone a little bit apart, but I will deliver something this year to 😉. I hope that the hangover is cured.
To begin with, I would like to introduce you to DGameMarket, which is the open source market for games. This means, in short, that you can buy and sell games, and all this on Lightning. Of course, these types of solutions are known on the general internet, but mine is better 😛.

- The whole system was designed to be a trust-minimalised system - without a third party and automated. This significantly reduces costs and increases system reliability.
- Thanks to not using Javascript, the site works very well in TOR (JS works by default, but can be disabled for security reasons) or GNU Icecat (Javascript trap problem)
- Thanks to Lightning Network, transactions are not only fast, anonymous and cheap - but ultimately the whole system is very profitable. What do I mean? In order to operate, for example, Fiats, the competition must have a huge fee, which can even reach a few dollars per game. In this instance, it is 5 cents.

I ask for feedback etc. 😃 The system has been tested in various ways, but it may contain errors. Please report them to me.

Very cool. I wasn't aware of joltfun either so I didn't know what you were selling. You reveal keys upon purchase.

I suggest maybe target a specific niche, because it will be tough to compete with big players.

Bitblog raport
fervi posted in Bitcoin 2020-12-08T17:41:22.0530000
In general, I have been working on Bitblog for some time now, which is a kind of competition for Zapread (but also not entirely, so I am counting on cooperation between projects). For now it is still a very early phase.

Such a description of various curiosities.

According to the conversations with @fwtf I had to set X Frame-Options to Deny. And if it makes it impossible to display the page in Iframe, it's done. Very strange, because I would expect full blocking ... On the other hand, can a browser know how a given page is configured without entering it?

Markdown has cool features that ordinary HTML code does not have. It is usually a safer form, but it also takes less disk space (and in decentralised systems this is important information). I don't know if Markdown will be available, but tests are ongoing and there is an editor (add_articles2.php). Unfortunately I'm not good at Javascript and configuration of this editor ... but it works quite well for now (but it would be useful to throw away HTML completely).

People want to join groups, so we use Discords or Zapread (although I'm not very active doesn't mean I'm not there :D). We want to be part of something!

My plan is this. Creating a simple system to create posts (like a blog). Thanks to its openness the system can even be decentralized, where content can be sent to other Nodes. After all, it is the site administrator who can decide what can and cannot be found on his site. Of course, nodes themselves can be independent and connect to their favorite nodes with similar interests.

Of course, what I want is for my instance to automatically upload user entries to Zapread if it is created. Thanks to proper "architecture" construction (e.g. it will be possible to have one tag, compatibility with Zapread restrictions) it should be possible. Of course, the user will be able to disable the upload of his Zapread entries (e.g. when he wants to do it from his account).

I think that cooperation can help us and I would like to strive for it. Maybe we can help Yalls somehow, but I don't know how yet ;)

Some remember my old DGameMarket project based on STEEM shitcoin. Although the concept of "DGame" brand was cool for me (there were supposed to be some interesting brands related), unfortunately, because of shitcoin reasons the project fell down (Shitcoin died).

So I had to manage the projects differently. Of course, as Bitcoin has always ruled the world of cryptovalut - the choice had to fall on him (no competition).

DGameMarket is the second iteration of the project ... DGameMarket. Based on experience I decided to make a product that will be better than the original version:
- Automated .
- Trust minimized
- Safe
- Open Source

If there are people willing to test - please write to me on Zapread or Discord. The more errors and problems we solve, the better.

I want to thank @fwtf for reporting security related bugs. 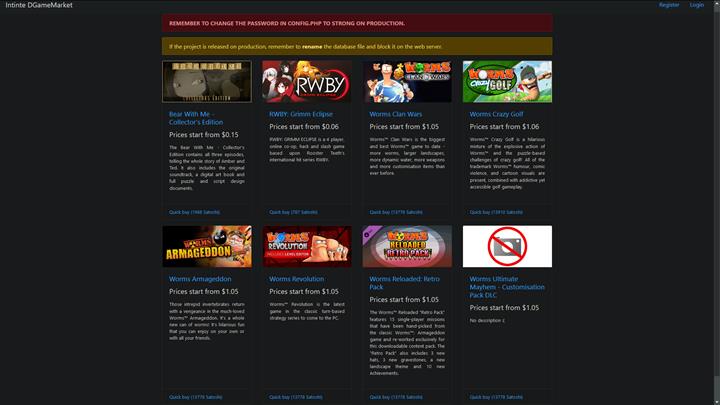 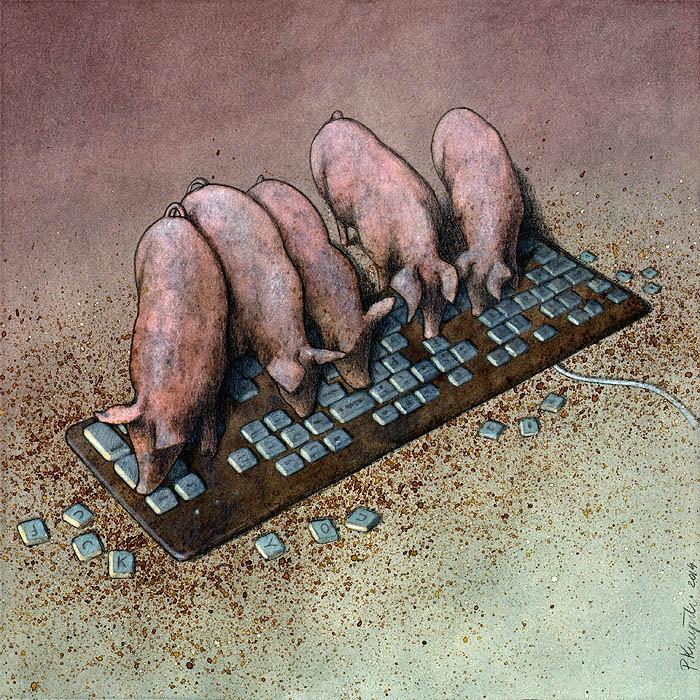 In my subjective opinion, Lower Silesia is, the best land in Poland to live in - perhaps the fact that this region has been conquered into the reign of other countries (the Czech Republic, Germany), perhaps the proximity to Western Europe or its shape makes it simply good here.

However, this province has its advantages. Apart from quite well-developed architecture (Aquapark, forests, communication) it has good points for the average resident. We have a lot of monuments, even a lake with a beach is located here, but also mountains. So, within a radius of 40 kilometres from the town, you can relax on the beach or climb the mountain Sleza.

In the past, it used to happen often to climb this mountain, but I haven't done it for a long time - when the opportunity came, my friend and I went to "conquer it again".

How not to prepare yourself

At the beginning, the plan was to meet earlier and go to a stop, but even this did not work out, because you had to go to the shop to make the right supplies. It took a while, but it was included in the preparation time. Then we went to the bus stop, but we could not find the bus. A quick look at the schedule on the phone - you had to go to another stop (quite close).

All right, the bus in 4 minutes and we will be there ... Unfortunately, the timetable on the phone was not correct. Buses outside the city are not official, city supported carriers. So you cannot find them (timetables) on the city website, you have to look for them in other places, which do not have to guarantee their correctness. So you had to wait longer, but you did. For a price of about two dollars the bus reached the town of Sobótka, which is located from 500 meters from the top (or rather a stop).

We decided to follow the red trail. I do not know if this is the case in other countries, but in Poland there are 5 colours of trails. This trail should be the most interesting ... I don't know if that's the case, but it's about going uphill at an angle of ~30 degrees for about two damn hours. I thought I'd go down for a heart attack. I don't know if it's because I used to climb the yellow trail (but they both connect in half), but I've never been so tired of climbing. Sometimes I wondered if I would give up, but we did. We managed to climb up.

First, we went to the lookout point right next to the church. It is simply a tower, where after three or four ladders we climb up a mountain and can take pictures of the area. Unfortunately, although my phone is worth $100, I did not want to risk losing it. In addition, the tower itself does not look properly secured and I preferred not to risk any strange maneuvers. 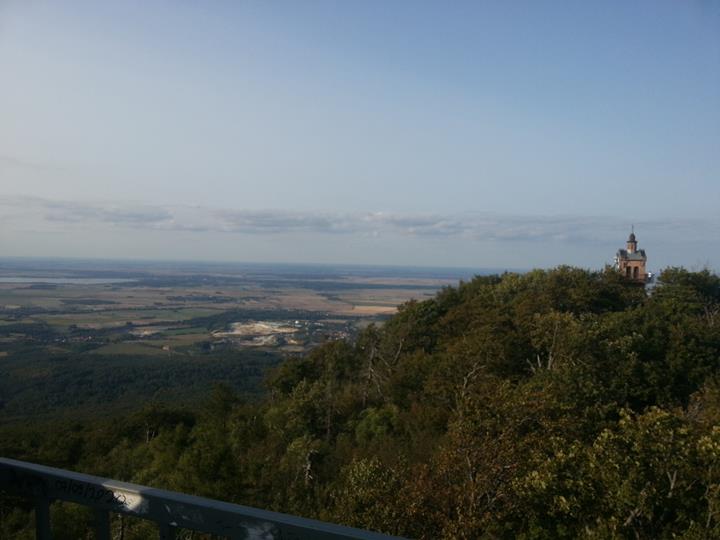 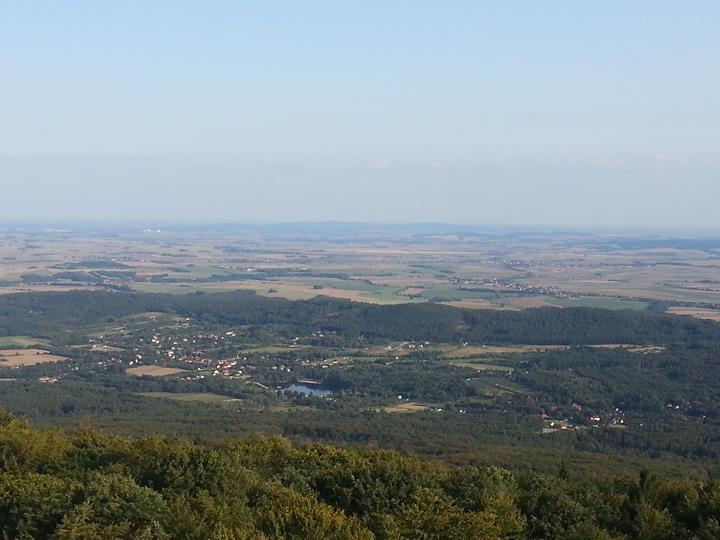 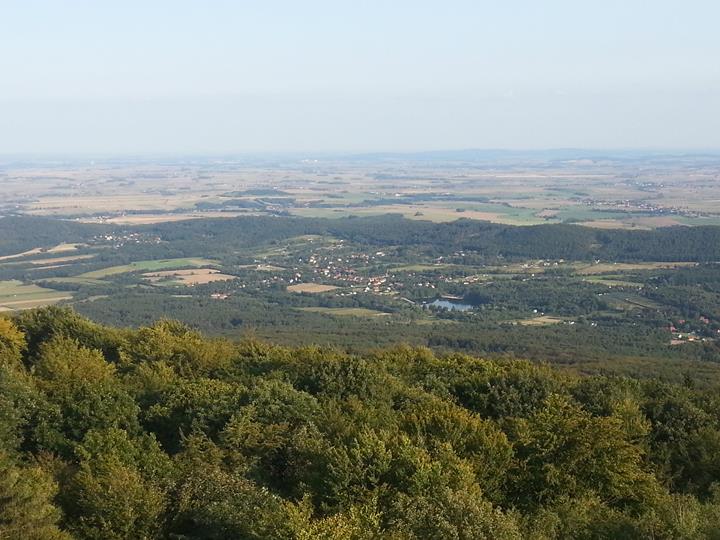 The church is the main attraction at the top of the mountain for some reason, but unfortunately, when we got there, we could not visit it anymore. So there are pictures from outside this building. 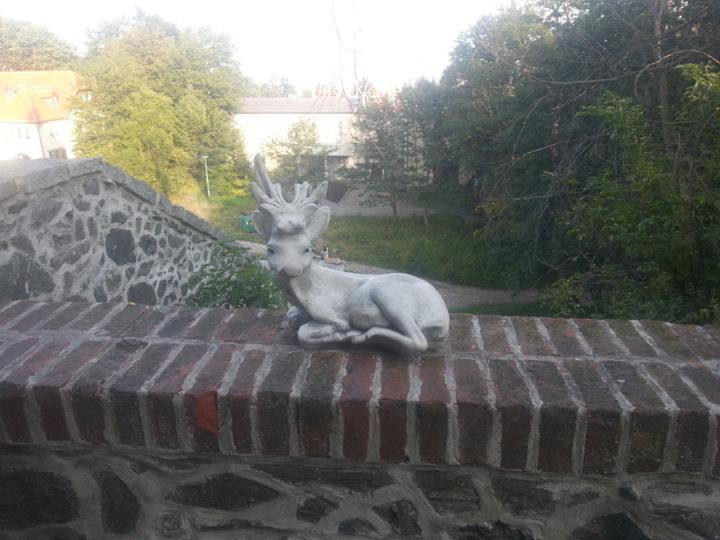 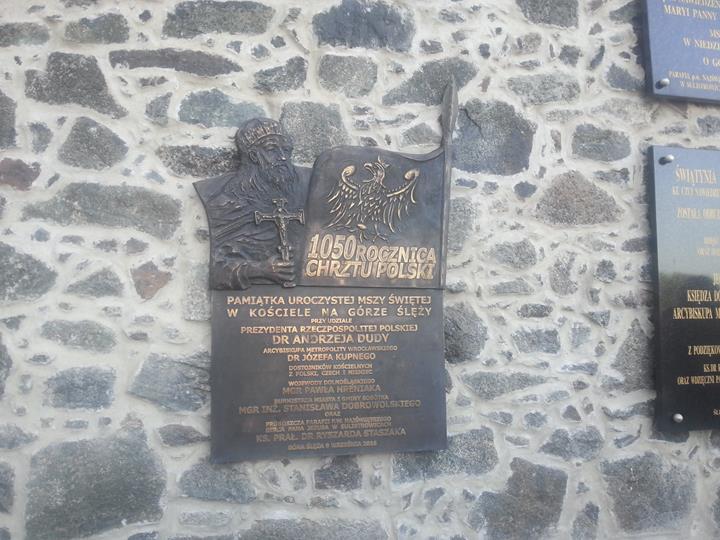 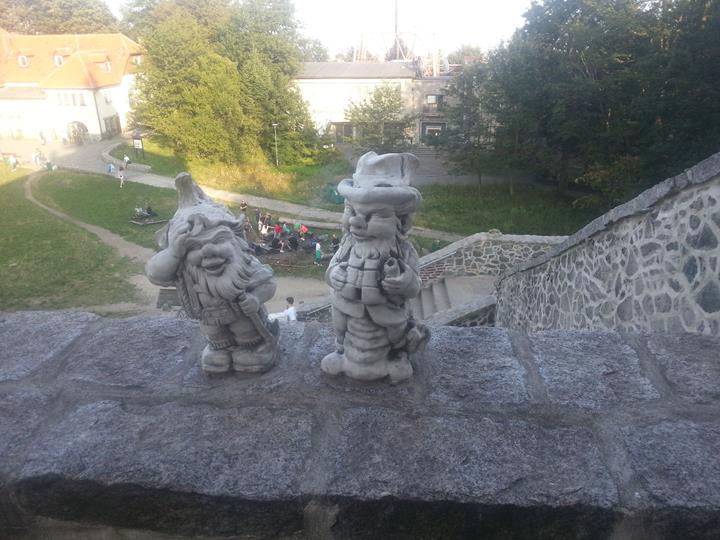 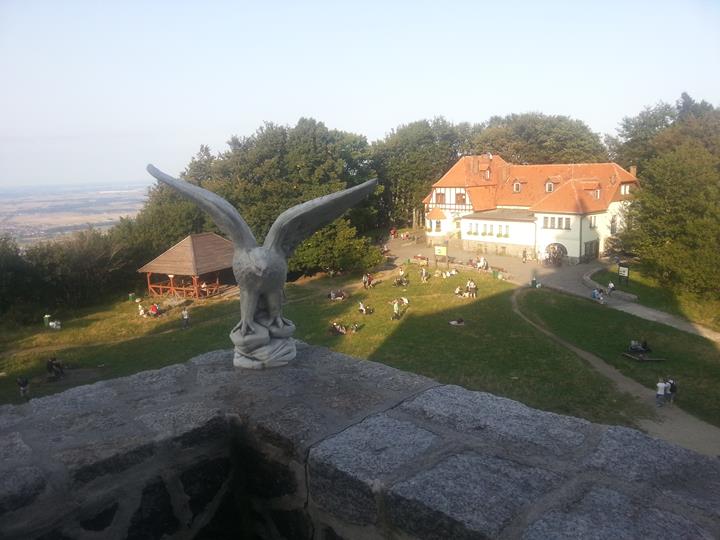 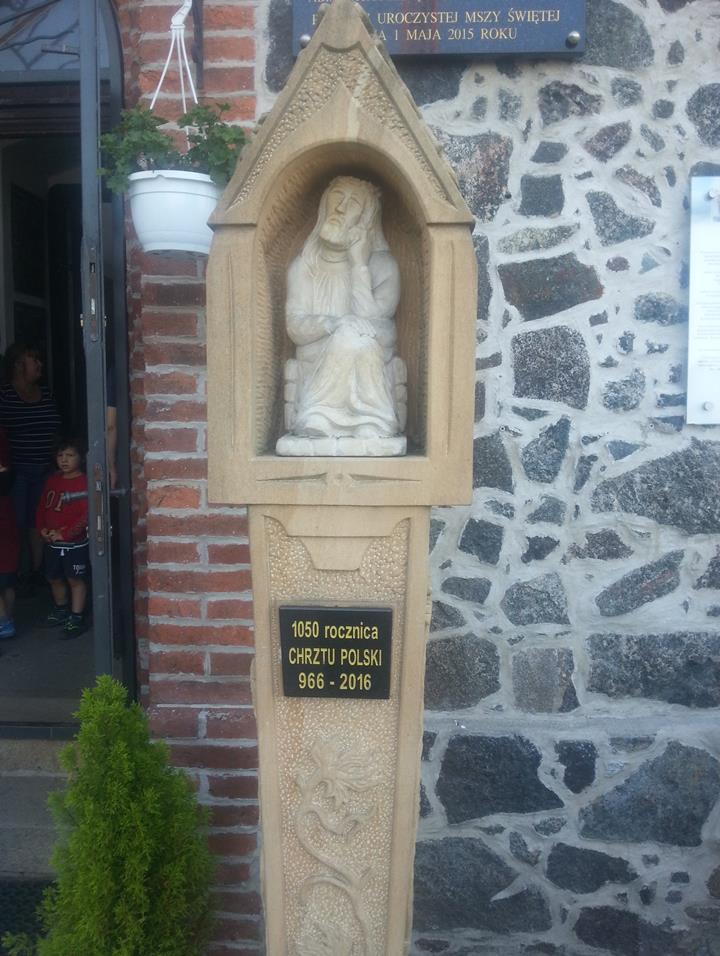 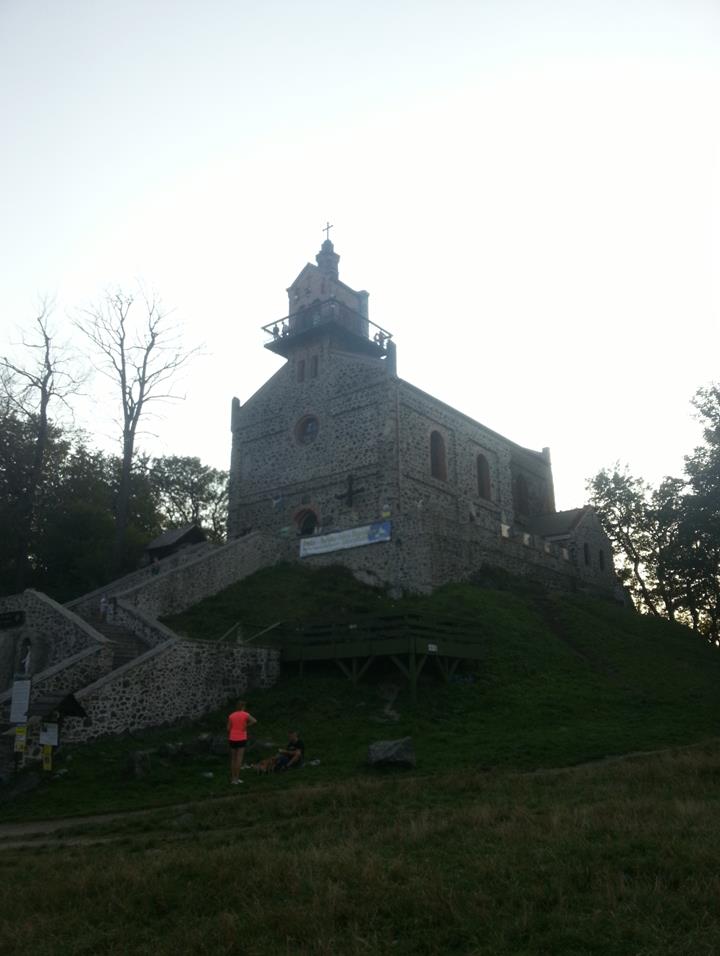 Going down the same path as the entrance ... seems easier, because less effort is needed, but because of the unevenness of the terrain it is a big problem. Slippery stones and a large fall cause you to try to walk on the ground instead of on these stones. On the way, however, you have managed to take a picture of a virgin with a fish and a bear. 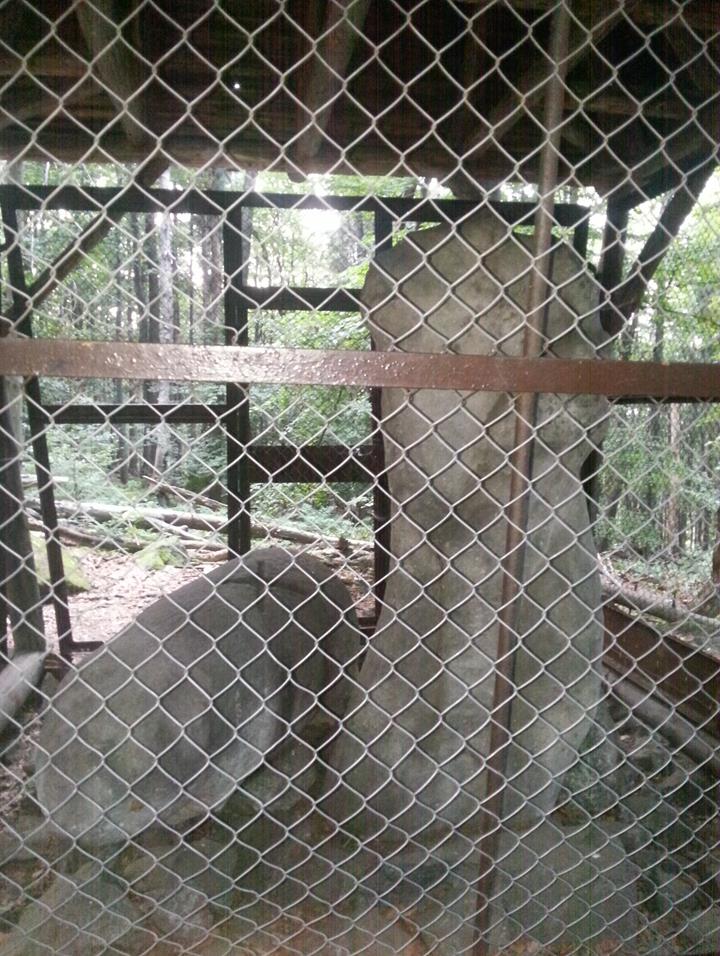 He managed to get on the bus (he was already driving once an hour) and return home. Tired terribly, but alive. For a week my legs hurt, so I don't know if I recommend it ;) Cambodia, the town of Battambang, boulevard on the Sangke River. A woman appeared, dirty, neglected, probably beaten. She was holding a broken mirror in her hand and looking at it. I took a few shots and felt sorry. I thought, what would this beautiful woman look like if she was wearing Cambodian clothes, had a nice make-up and a haircut ...?
Unfortunately, she was with the guardian, you know what the guy does professionally. At the sight of white with the camera he became worried, I became even more worried. I decided to evacuate from this place because it is Cambodia after all. 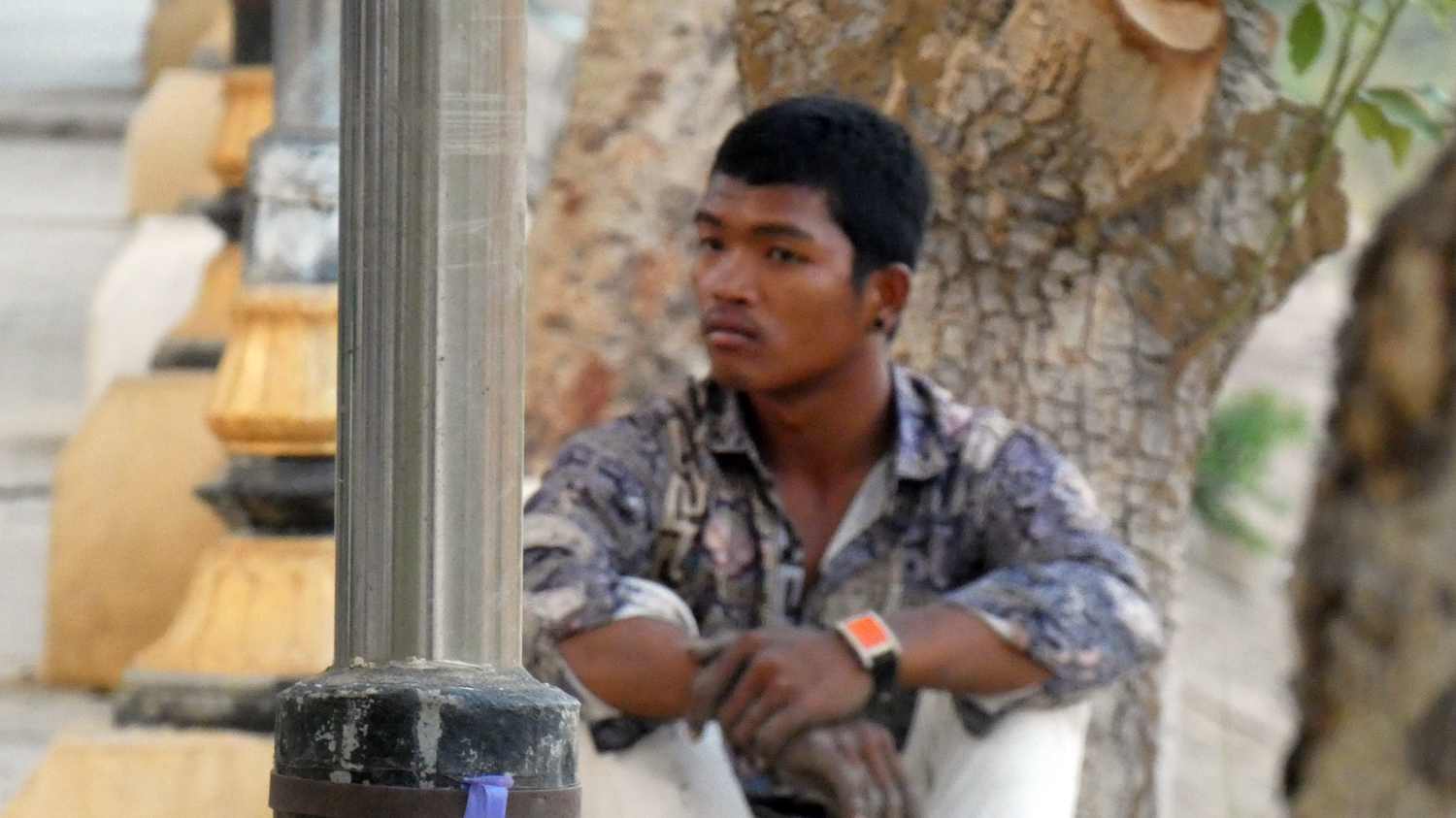