An Interesting Idea Towards Terraforming Mars

I think this is a really interesting idea to enhance the atmosphere of mars, and a possible way to deal with one of the major challenges for sending humans to mars.

The issue is that Mars has a very minimal atmosphere.  So when considering habitats such as what @marianomariano proposed here, the lack of atmosphere is a major challenge.

So can we do anything about the atmosphere issue?

The proposal is to place a satellite at the Mars-Sun Lagrange L1 point.  This satellite would produce a magnetic field which deflects the solar wind such that the planet would be shielded.  Once this happens, the atmosphere would become thicker and the partial pressures of the gasses would begin to change. 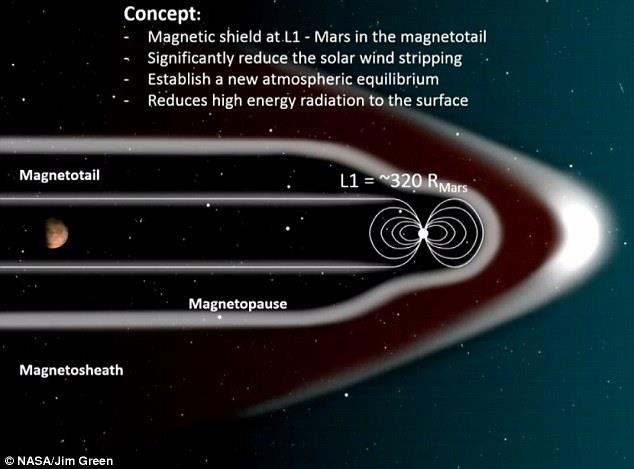 So how feasible is this?

Surprisingly this is very possible to do.  A proposal was made here: https://medium.com/our-space/an-artificial-martian-magnetosphere-fd3803ea600c but I don't think they considered all the options.  We would need a magnetic field about the order of a single MRI machine.  With superconducting magnets, the total power to produce this is not as much as one would imagine.  I estimate this would require about 50,000 Watts to operate.  A nuclear TRG generator would probably not be enough since they cap out around 2,000 W.  The International space station produces about 75,000 to 90,000 W with solar panels.  So maybe that's the solution.  Keep in mind though that the mars L1 point is further from the sun, so the solar flux would be reduced.

Amazingly, we have parked satellites at an L1 before.  We have 4 satellites right now at the Sun-Earth L1 point.  This was first accomplished in 1978!!

I'm curious about what the atmosphere could look like.  What pressure, what composition?  I will have to do some more research on that.

From what I know, is that the magnetic field is only one of the problems to tackle, to get Mars its atmosphere. The other one is gravity. The mass of Mars potentially produces insufficient gravity to keep a thick atmosphere stick to its surface. From [wikipedia]: ".. the lower gravity of Mars requires 2.6 times Earth's column airmass to obtain the optimum 100 kPa (15 psi) pressure at the surface.[17] Additional volatiles to increase the atmosphere's density must be supplied from an external source, such as redirecting several massive asteroids containing ammonia (NH3) as a source of nitrogen.[1]..."