We bought out tickets for the Acropolis about 8:30 and started up the hill.  As with most archaeological sites, the piles of rocks are amazing and you can barely imagine the enormous task of putting all these puzzle pieces together - about 70,000 pieces!

Starting up the hill, we passed the Theatre of Dionysus, which we could look at only briefly because new gravel was being spread on the path.

The Odeon of Herodes Atticus is beautiful.  All the seating was replaced in the 1950s with new marble; the original 2-storey stage wall is quite well preserved.

The Propylaea was quite a huge surprise - literally.  Pictures do not really prepare you for the experience of walking up the stairs and ramps, through the columns and out onto the acropolis.  It has been completely cleaned and provides an awe-inspiring start to this area. 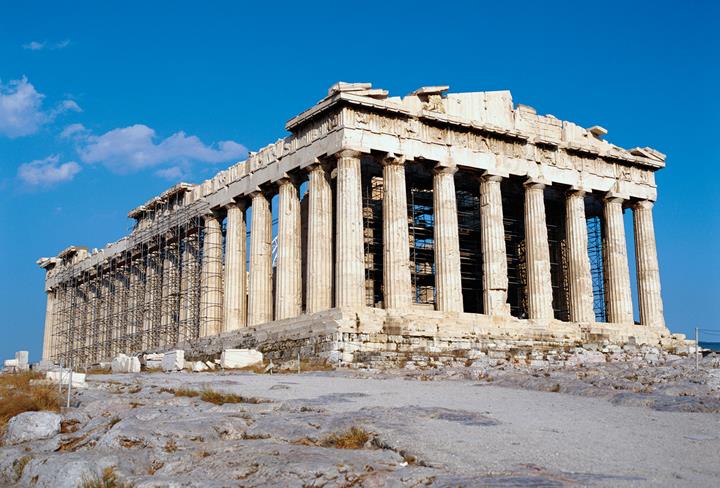 Of course, the Parthenon was spectacular.  We walked around it at least twice and were lucky that we had a beautiful blue sky against which to photograph this monument.  There is a lot of restoration going on and you can see the progress in both the clean and beautiful columns and in the replacement parts that allow them to piece in original bits of column.  You can see this all over the Acropolis.

I won’t talk about all the various buildings.  That’s what the internet is for!  But we spent about 3 hours covering as much as we could, side to side, front to back.  Hundred of pictures!

After visiting the Acropolis, we climbed Mars hill for a great view of the Propylaea.

Then, off to the Athens Agora. While it is again an area with piles of rock that are hard to make sense of, there are a couple of buildings of note.  The Stoa of Attalos was originally built in about 150 BC and it was faithfully reconstructed in the 1950s-45 Doric columns and 22 Ionic columns inside.  Quite beautifully in itself but it also contains an excellent little museum of items found in the Agora. 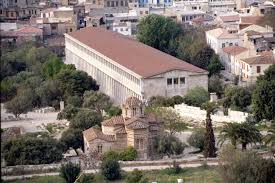 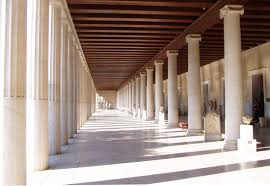 The other building in quite good shape is the Temple of Hephaistos from 450 BC. 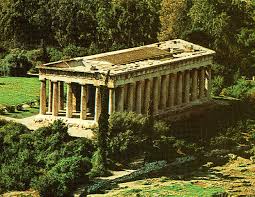 At this point we were pooped and had to stop for our daily 1/2 litre of red wine!  Throw in a Greek Salad and Pork Gyro eaten across the street was the Agora and you have a pretty perfect break!

Rejuvenated, we headed off to the Keramikos Cemetery and Archaeological site.  Another excellent little museum and a site that shows the various main roads that ran through Athens with burial tombs along the sides.

Egads! Enough for one day.  It’s getting dark so we headed home, but stopped at a little grocery store on the way home for a picnic supper.