Bus day again.  We took the 8:30 bus from Pyrgos to Patras—a 2-hour trip that took about 3. Backtracking a bit, we had taken the road from Patras to Pyrgos on our way to our Olympia visit. But it’s nice countryside and worth seeing again, It’s very green and there are a lot of greenhouses, many obviously growing strawberries.  There are places with irrigation but it must also rain quite a bit as all the roadside are very green

We arrived in Patras and tried to buy a ticket to Delphi. “No bus to Delphi” was the response from the ticket agent. We asked a second person who said “Different bus station. 3 corners.”   This was not the usually helpful response that we’ve been getting from our questions. Nevertheless, we trucked off in the general vicinity of the “different bus station” and eventually found it.  We bought our tickets but had 2 hours before the bus left so we thought we would wander around downtown.  It took us a little while to realize that this was BLACK FRIDAY!!!  The streets were packed, the stores were packed. There were men selling bouquets of helium balloons. It was like a big party! it’s obviously a much bigger deal here than at home.  I tried to buy some Mac cosmetics at 60% off but just couldn’t wait in line long enough.

Parking was nuts.  Parking spot too small for your car? No problem. Drive your nose in and everyone will go around the tail of your car.  All the downtown streets seemed to be double parked - blocks of cars double parked.  Oh, here’s a car park. Pull up - car park is full and you are half on the sidewalk and half on the street.  No problem - just leave your car here and go shopping.  Next car - pulls up behind the one that is half on the sidewalk, turns his car off and goes shopping. 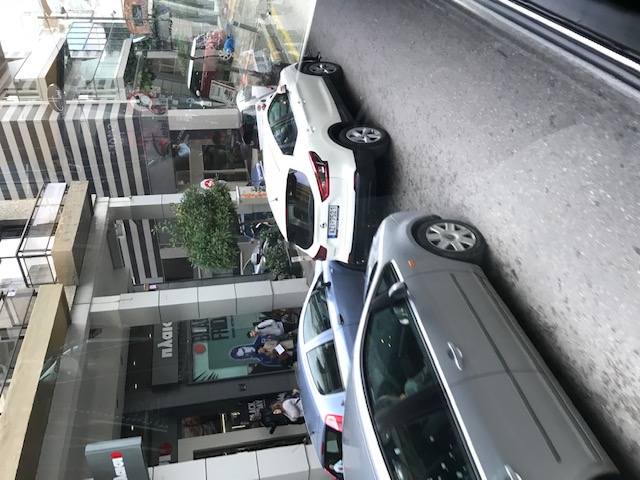 In Patras, there is a bridge the spans the narrow neck of the Bay of Corinth. Quite a nice looking bridge. 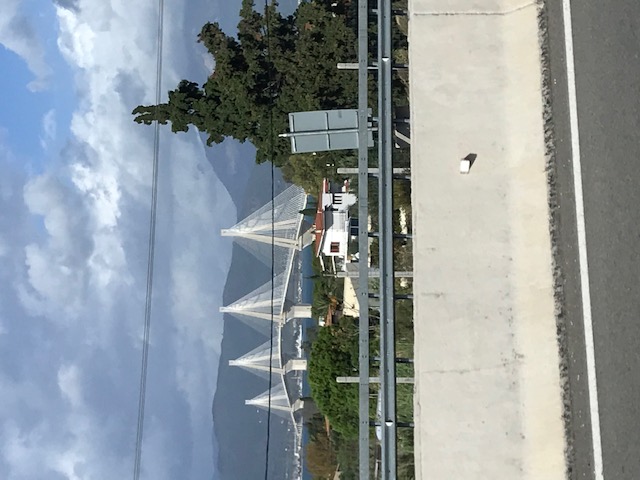 I thought the ride to Delphi was about 2 hours but hadn’t counted on getting the milk-run bus. Oh well! it’s much drier on the north side of the bay but there are some lovely little resort-y looking towns with nice stone walks along the water.  Must be quite a popular coastline during the summer months.

We arrived in Delphi, which is really only 2 main streets.  Lovely little hotel. Here is the view immediately outside of bedroom window.

The hotel recommended a restaurant down the street, which we tried out.   Rick had lamb which was really delicious as was my dinner.  Lots of little shops, very hilly - sort of reminded us of Assisi.  Many of the shops appear to be closed for the season.  Tomorrow we can explore the ancient site of Delphi. 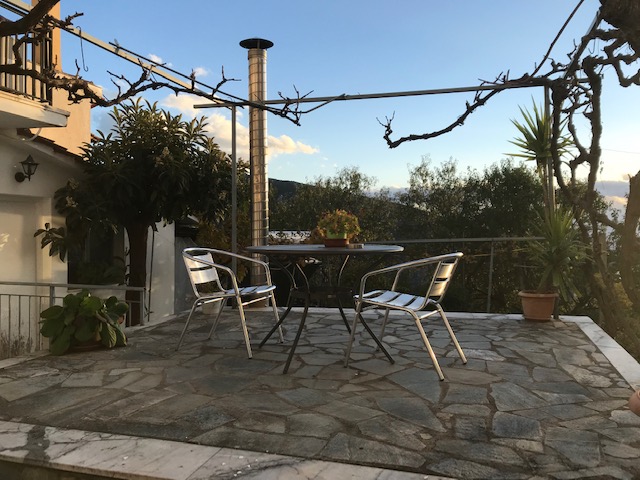