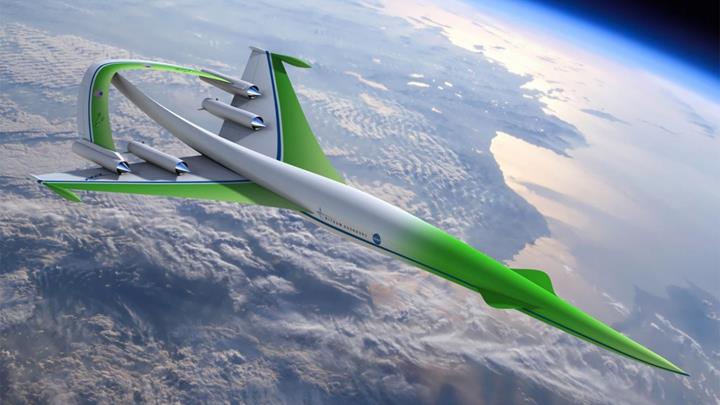 By the end of the year, Boom will carry out a maiden flight of a new generation supersonic jet plane prototype. Ultimately, it will be the successor to the famous Concorde. Overture will fly at speeds up to 2700 km / h.

The plans are ambitious, because it is to be the first in the history of aviation a fully economically profitable supersonic passenger aircraft. This could not be said for the famous Concorde, so they eventually stopped flying. After the successful demonstration of this year's technology demonstrator, as early as 2020 Boom intends to start selling the first pieces of its super-fast and luxury jet. They are not just boasts. Representatives of the American corporation said that in the new financing round they received as much as $ 100 million from investors for the implementation of their project, so now its budget has exceeded $ 140 million. This is enough for the first tests.

Aviation experts say that the future is super-fast, supersonic passenger jets that will shorten travel times between world metropolises by up to 3-4 times. Everything indicates that this will happen faster than everyone previously assumed. The machine called XB-1 is currently in advanced construction at Boom Aerospace in the United States.

The company is supported by the famous billionaire Richard Branson, founder of the Virgin Group. On the basis of the demonstrator, a full-size passenger version called Overture is to be created. According to the company's plans, it will allow 55 passengers to take on board, and in comfortable conditions at a speed of 2700 km / h, take them from New York to London in about 3 hours and 15 minutes, and Sydney to Los Angeles in 6 hours and 45 minutes. It is worth emphasizing here that regular flights on this first route take about 8 hours.

Ticket prices have not yet been set, but experts are sure that initially they will not be less than $ 5,000. However, business people are willing to pay this amount for faster travel around the world. Aerion Corporation has similar plans. It wants to reduce the flight time between London and New York, which is two key business locations, to just 3-3.5 hours. Supersonic Aerion AS2, according to its constructors, is to develop 1.5 mach, or over 1800 km / h. On a short journey from the Old Continent to America, the jet will take 8 to 12 passengers.

The development of such speeds will be possible thanks to three modern jet engines and the technology of supersonic natural laminar flow of wings. Engines called Affinity do AS2 were presented by General Electric a few days ago. It is a double-shaft design with a double turbo-fan, which is controlled by a new generation Full Authority (FADEC) digital engine control system.

Boeing recently announced that it has a plan to build even faster aircraft. Apparently, for some time the concern has been developing an innovative propulsion that will allow passenger aircraft to accelerate in the air to a dizzying 6000 km / h. The Chinese also have such visions. Their aircraft using new generation jet propulsion systems are to allow air travel at speeds exceeding 8000 km / h.