Mosque day!  They are all beautiful in their own way: the ceramic tiles, the domes and arches, the peaceful courtyards.  We set out from our hotel in a “new” direction and stumbled on Kucuk Ayasofya Camii.  From the time of Justinian, it is supposedly in the same shape as San Vitale (an octagon and also by Justinian) in Ravenna, Italy — a church we were saw on our last European trip. Next the Sokollu Mehmet Pasa Mosque - bluer than blue!  Gorgeous!  But no photos allowed.   Mosque of Suleyman the Magnificent - magnificent!  Huge but much more sedate and peaceful than the Blue Mosque. The “new Mosque - one pillar had lovely ceramic tiles coating it.  The rest is under renovation and, while it is still open, most of the architecture was covered up. All the mosques have been more than gracious in providing scarves and other apparel for visitors, and plastic bags for your shoes so that you can carry them with you. 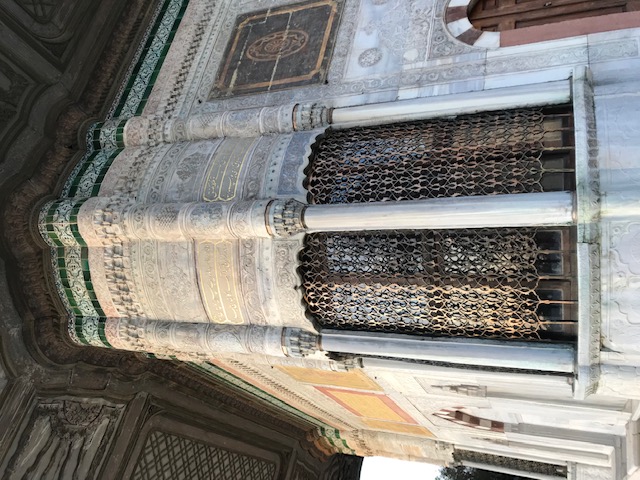 The really fun part of the day was the Grand Bazaar - and getting there!  Street after street of little shops and crowds and crowds of people.  I assume this is used by residents as well as tourists because the shops sold more household goods than touristy trinkets:  pots and pans, dishware, vacuums, and the like.  And there were many more women, and many more women in traditional garb.  The streets were absolutely packed - like Christmas in the malls.  Then on to the Spice market which was packed again.  The Spice Bazaar is by the Galata Bridge which spans the Golden Horn to the new part of the European side of Istanbul.  The top level is lined with fishermen while the bottom level has a lot of restaurants.  We had our afternoon beer there and met a nice couple from Wales - also enjoying their afternoon beer.  They were taking the train from Wales to Azerbaijan to watch Wales play Azerbaijan in soccer, sorry - football.  Now those were keen fans!

Outside the spice market is the Pet and Plant market.  Lots of seeds and bulbs, fertilizer, pots ... and leeches!  Every second vendor had a plastic jug of leeches and there were some pictures of them on an arm or face.  Gross!  Should have taken pictures on my phone so that I could include them here!

I know we have not been to the “business” or “banking” part of town, but we have covered most of the old part of the European side of the Bosphorus.  We are amazed at the lack of traffic.  Is this a traffic limited zone?  There are some cars, some vans delivering goods to the shops, motorcycles — but this is a city of 4 million people!  The Tram goes through, busses, metro etc.  So i guess everyone takes public transit or walks - I don’t know.  Anyway, we walked with them - 22, 620 paces today.