Navcoin: A proof of stake coin for creating and issuing other tokens on its platform

To view how the transaction takes place on the Navcoin blockchain, you can follow the link below;

Navcoin project was started  and launched in 2014 with the main objective of solving the problem of scalability as well as easing transaction on the network .

Navcoin was created by Craig Macrgegor who is a blockchain technologist with the main objective of becoming a native coin for its Navcoin blockchain platform thus Easing transaction rate on the network as well as solving the problem of scalability which is being faced by platforms like Ethereum.

Unlike cryptocurrencies like bitcoin and Ethereum which are released through the mining process using power supply and internet using the proof-of-work consensus, for Navcoin, that is not the case.  Instead, Navcoin was created to become a proof of stake coin.During its launch, some amount of around 50 million coins were released. Since Navcoin is an inflationary coin, during its first staking program, 20% of the coins staked will be released followed by 10% the second year. from there, the inflation rate of reward declined to 5% per anum from the coins staked. Let say that in the first year the amount staked was 10,000,000 coins ,then this will bring an inflation rate of 2000,000 coins in that year. If in the second year, the coins staked is 20 million then its inflation rate will be 2 million coins as well .After that, the inflation rate becomes 5% the whole year. You can either become a solo staker or can pool your coins to a staking pool to increase your reward. As a solo staker, your reward can go up to 5% per year while when you pool your coins to a staking pool your reward can go up to 10% the whole year since the staking pool will also be rewarded the fees income generated which they can distribute to stakers based on their leasing amount. The more the staking the more the reward. To become a solo staker, you only need to download the core wallet for Navcoin and make sure to deposited some Navcoin amount over there.Here is how the Navcoin reward process looks like; 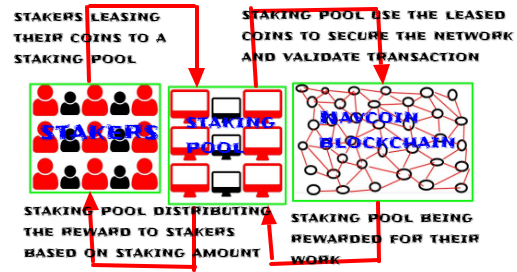 To stake staking Navcoin, you can download the Navcoin core wallet for windows, Linux and Mac or you can join a pool staking from below https://www.navpool.org

Unlike other cryptocurrencies which have a maximum capitalization in their blockchain network, for Navcoin, their is no maximum cap. Instead, it is an inflationary coin. During its launch, 50 million coins were released. After that, when its staking kick off in 2014,  20% of the coins staked were to be released followed by 10% the following year and 5% another year respectively.

Currently, 1 Navcoin is worth more than $0.08 and its price is expected to increase over the next period of time. Navcoin is being abbreviated as  NAV.

Converting my Navcoin  to other cryptocurrencies

Transferring my  Navcoin to other Users

If you feel that you need to learn more about Navcoin, then you can follow them on their site. Here is the link redirecting you to Navcoin platform website

Now that you know, I think that it is time for you to start earning some Navcoin coin by simply staking them on your navcoin core wallet or by leasing your coin to a navcoin pool to secure the network. The more your staking the more your reward.If you feel that we should also own some Navcoin for simply helping you know about then here is our Navcoin address;