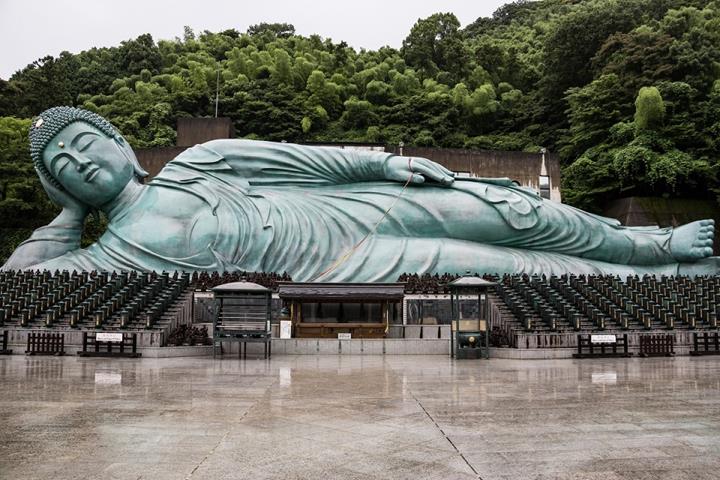 Nanzo-in (南蔵院) is a Shingon sect Buddhist temple in Sasaguri, Fukuoka Prefecture, Japan. It is notable for its bronze statue of a reclining Buddha, said to be the largest bronze statue in the world.

"The reclining Buddha statue, known as either Nehanzo or Shaka Nehan ("Nirvana") is 41 meters long, 11 meters high, and weighs nearly 300 tons. The statue depicts Buddha at the moment of death, or entrance into nirvana.

The interior holds ashes of Buddha and two Buddhist adherents, Ananda and Maudgalyayana. Those relics were a gift from Myanmar as thanks for the sect's donations of medical supplies to children in both Nepal and Myanmar. In 1995, 1,300 monks from Myanmar and Nepal attended the unveiling of the reclining Buddha statue.

Inside the sculpture, sand from each of the 88 shrines that make up the Shikoku pilgrimage are stored below bricks within a narrow hallway.

Every year, hundreds of Buddhists come together to clean the statue using bamboo leaves tied to five-meter poles."